Year-on-year pharmacy crime, including armed robberies, is trending upwards.  Last year’s robberies increased by 16 percent to 839, and based on Drug Enforcement Agency (DEA) statistics, that number is projected to increase this year by another 9 percent.

With the approach of the holidays, when robberies of all stripes jump by 18 percent above the national monthly average, now is the time to ensure that your staff and your facility, whether you are a supplier or an independent retailer, is prepared to avoid tragedy.

There is a plethora of addiction websites and media stories documenting the unholy mix of holiday stress, holiday gatherings, and alcohol and narcotic addiction, dependency, and abuse. 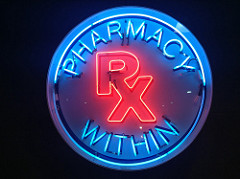 Pharmacies are an attractive target for robbers. Courtesy: Flickr/Mike Mozart

So What Can You Do About It?

Criminals will do their homework on their targets before taking action.  They look for the positions of your cameras, your motion detectors, and your alarm systems.  A random broken window may be the criminal testing your alarm system and observing how and how quickly you and the police respond.

There is not much that you can do to stop a determined perpetrator from committing a robbery.  The whole event can be over in two minutes, well before law enforcement can realistically arrive.

What you can do is actively make your pharmacy a less attractive target, to “harden” it.  Here is how:

Contact your local law enforcement organization and request a security check to find your facility’s vulnerabilities.  This will support good communication in the case of an emergency between you and your local officers.  Record their recommendations and then start addressing the vulnerabilities.

Installing and regularly testing a well designed alarm system and multiple surveillance cameras are the two deterrents law enforcement and pharmacy crime experts consistently recommend.  These will only work as deterrents if they are clearly announced with illustrated warnings such as “under surveillance,” “please remove hoodies and sunglasses when entering the store,” or “safe on premises,” are visible.

Ken Fagerman, pharmacist and author of “Staring Down the Barrel: A Pharmacists’ Guide to Diversion and Coping with Robbery,” recommends installing the most advanced alarm system you can afford and making its presence clearly visible.  Pharmacies without an alarm system may have difficulty in acquiring insurance.

If you are considering installing a silent alarm or a silent panic button, , consult with local law enforcement prior to making this investment.  The sudden appearance of flashing lights and armed officer may change a robbery into a hostage situation.

In order to capture a criminal’s face, surveillance cameras inside a facility should be placed at eye-level and pointed at locations where your staff interacts with customers, such as the cash register and the pharmacy counter.  To assist in apprehension cameras should be placed outside in such a way where they can easily pick up license plates, and your facility’s entrance.

If your pharmacy regularly works with a substantial amount of narcotics, work with law enforcement and consider the risks of having a safe.  In 2009 Walgreen’s started using and advertising their “time delay” safes, which will only open some minutes after the code is correctly entered.  In this instance, a potential robber will be forced to asses the risk of waiting for the safe to open, or moving on to an easier target.

If you do not wish to use a safe, or do not have a safe, you may want to consider distributing the most sought after medications around your facility, instead of putting them an easy single grab-and-go location.  If a robber thinks it will take too much time to collect the goods, he may just move on in search of an easier target.

Other technologies, that may dissuade a criminal from targeting your pharmacy, if they are advertised, include sprays that mark the robber and tracking devices inside medication bottles.

Human interaction may also dissuade the would-be robber from targeting your pharmacy.  If you and your staff greet each customer, looking him or her in the eye, the message is sent to a criminal that you are paying attention, and will therefore be more able to identify them after an event.

All pharmacy robbery experts agree that the best way to avoid tragedy in a robbery situation is to plan on what you and your staff will do in the event of a robbery, then train for it and rehearse.  Again, local law enforcement should be willing to assist.  If you want to start doing your homework now, Rx Patrol has a free series of videos dedicated to pharmacy robbery and how to survive.

In Fagerman’s “7 tips for surviving a pharmacy robbery” published in Drug Topics, his No. 1 piece of advice for surviving a robbery incident is to fully comply and, “Above all, don’t be a hero and/or attempt to counter or repel the suspect with a weapon. Nearly all of these attempts end badly with injury or legal consequences. Your life or that of a co-worker isn’t worth risking over a few stolen narcotics or cash.”